Alice Ann Bailey was born on June 16, 1880, in Manchester, England. Her maiden name was La Trobe-Bateman but she was best known by the surname Bailey, which she took from her second husband, Foster Bailey. 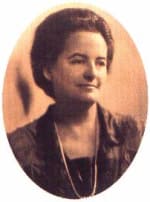 She was a prodigious writer, producing 24 books from 1922 until the late 1940’s which, like the works of the Theosophical Society’s co-founder Helena Blavatsky before her, describe a Theosophical worldview. Like Blavatsky, she also claimed to have received her teachings from a Master; in her case Djwhal Khul (who she would often refer to as ‘The Tibetan’ or D.K). Bailey served only as a scribe for her Master, who would telepathically dictate the majority of her writings.

Aside from her books, she is also remembered for founding an esoteric school in 1923 known as the Arcane School.

Her third major accomplishment was the co-founding (along with her husband, Foster Bailey) of two activities known as “World Goodwill” and “Triangles.”

Bailey received religious instruction throughout her childhood as a member of the Anglican Church and had a penchant for the “mystical”. Her family (the La Trobes) was a wealthy one, though this did not prevent her from attempting suicide on three occasions by the time she was 15. Bailey claims to have been a “society girl” up to the age of 22, having lived with her affluent grandparents, and later, her aunt.

Bailey’s tendency towards the esoteric was further fueled by her first meeting at age 15 with a mysterious figure who she later came to identify as a “Master of Wisdom”. In 1895, while staying with her aunt in Scotland, Alice had an encounter with a man she later came to know as Koot Hoomi or K.H. According to her autobiography, his message for her was that she was to work for him in the world. She considered him to be a member of the hierarchy of spiritual Masters. Theosophists believe these Masters oversee the evolution of humanity through the dissemination of ancient wisdom.

Bailey also claimed to have experienced a second significant event during this period of her life. While in the Himalayas, Bailey participated in the annual ceremony performed during the “Full Moon of May.” Though details of the actual ceremony remain scant, it seems to have been esoteric in nature and deeply revelatory to the young woman. She claimed to have experienced the truth of reality as a unified “divine and living whole.” She believed this demonstrated the “glory of the Lord.”

Bailey’s mysticism remained a key influence in her life, but her Christian upbringing had also taught her the importance of caring for the sick and poor. She therefore decided to join the Y.M.C.A (Young Men’s Christian Association) as a social worker in her early twenties. She would also go on to serve as an evangelist to the British troops who were based in Ireland and India. It was during her time in India that she was to meet her first husband, Walter Evans. Together they moved to the United States of America as part of his seminary training for the priesthood. Although the couple had three children together, the marriage eventually came to an end and they divorced in 1915. Bailey found herself in a desperate financial situation and took a job in a California sardine canary to support herself and the children.

It was at the time of Bailey’s divorce that she first came across the teachings of the Theosophical Society. The Secret Doctrine by Helena Blavatsky was particularly influential to Bailey and was the foundation upon which she would receive further instruction from her other Master, Djwal Khul (‘The Tibetan’). He appeared to her for the first time in 1919 and solidified in her mind everything that she had imbibed through the writings of Blavatsky and Annie Besant, another Theosophical writer. This meeting was to begin what Alice described as a “collaboration,” with Bailey serving as an amanuensis for Djwal Khul from 1922 until the latter part of the 1940’s.

The worldview she inherited from her Master portrayed a cosmos which was ordered in accordance to the plan of God. God’s laws were causal (karma) and involved continual rebirth (reincarnation). Humanity had an important role to play in the divine Plan and their development was overseen by a Hierarchy of spiritual leaders who were led by the Christ.

Bailey’s A Treatise on Cosmic Fire(1925) describes a cosmology which closely resembles the oneness of reality (or Parabrahm) as described by Helena Blavatsky’s Secret Doctrine. Bailey also built upon Blavatsky’s concept of the seven rays. These seven rays form the Manifested Logos (the expression of the One True Divine Self). She defines the rays as “a name for a particular force or type of energy, with the emphasis upon the quality which that force exhibits and not upon the form aspect which it creates” (Esoteric Psychology I, 316). The seven rays, which originate in the mind of God (or the “Boundless Immutable Principle”) trickle their way down through all of reality, evolving and establishing the different layers of existence from the larger macrocosms to the smallest microcosm according to the divine plan.

The seven rays concept has become foundational to New Age thinking and continues to play an important role in the movement.

Bailey claimed to have channeled (a form of clairvoyance) her teachings from her Master, Djwal Khul. In order to publish these doctrines, Alice and her husband, Foster, founded the Lucis Trust in 1922, three years after their marriage. Bailey’s brand of theosophy was also disseminated through the Arcane School, which was established for the purpose of training adult disciples. Bailey’s stated aim for the School (according to her Unfinished Autobiography) was to teach the truth about the Kingdom of God, which she believed was the “Spiritual Hierarchy” of our planet. The Hierarchy, which is currently present in the spiritual realm, has overseen the evolution of humanity through a progressive series of revelations. Humanity has the possibility of joining in with this divine plan which will eventually see the Spiritual Hierarchy materialize on earth. The School teaches that humanity may approach and eventually enter this Hierarchy. Fundamental to the vision and teachings of the Arcane School is the rejection of all theological dogma, sects and political ideologies. The “Ageless Wisdom” is international and transcends (while embracing) all religions, as it is the foundation of all previous revelation of God taught throughout history.

A key principle taught by the Arcane School is the Oneness of all humanity. God Transcendent is also Immanent and there is the same spark of divine Life within all people. This was followed by the founding of two organizations which were to “channel activity” in light of the global outlook and ambitions of the Arcane School. The first, “World Goodwill” (originally called “Men of Goodwill”) was founded in 1932 to promote the brotherhood of all peoples, regardless of their race, religion or political ideology. Founded in 1937, the second organization, “Triangles,” was based on linking together groups of three people who would creatively mediate together on a daily basis. The networking principle behind Triangles was not only motivated by a desire to promote personal relationships based around a shared “Will to Good” (hence the title of the World Goodwill organization), but was also designed to encourage regular creative meditation.

Alice Bailey: The Great Invocation and the Promise of a New Age

Bailey’s anticipation of what she described as the “New Age” was most succinctly expressed in the “Great Invocation,” a mantra which she hoped would come to be “what the Lord’s Prayer has been to Christianity”:

“From the point of Light within the Mind of God
Let light stream forth into the minds of men.
Let Light descend on Earth.

From the point of Love within the Heart of God
Let love stream forth into the hearts of men.
May Christ return to Earth.

From the center where the Will of God is known
Let purpose guide the little wills of men ―
The purpose which the Masters know and serve.

From the center which we call the race of men
Let the Plan of Love and Light work out.
And may it seal the door where evil dwells.

Let Light and Love and Power restore the Plan on Earth.”

York, Michael (1995). “The Emerging Network: A Sociology of the New Age and Neo-pagan Movements.”