Ancient Egypt provides the foundation for much of alternative history research. The monumental architecture, writing system, sculpture, art, and religion have been a seductive point of attraction for modern people for centuries. The material remains and culture of ancient Egypt have spawned hundreds of speculations. In recent years, ancient Egypt has been a prominent tool for the justifying the notion that aliens once visited earth. From movies like Stargate to Ancient Aliens, the argument that the high civilization of Egypt had an extraterrestrial catalyst has become entrenched in pop culture.

Aliens in Ancient Egypt? The Painting in the Tomb of Ptah Hotep 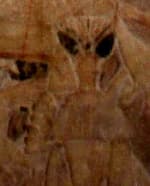 But what’s the proof of such a claim? Ancient alien theorists claim the photo in Figure 1 shows a typical “gray” alien in an ancient Egyptian tomb painting. One conspiratorial website called it “one of the most important clues to alien intervention into our ancient history ever made.”

The image comes from the tomb of Ptah Hotep. Ptah Hotep was not a pharaoh; he was a vizier—the co-regent of the pharaoh. Specifically, Ptah Hotep was vizier to the pharaoh Djedkare Isesi (ca. 25th-24th century BC), a pharaoh in Egypt’s Old Kingdom, the pyramid age.

The picture is of poor quality—but that works to the advantage of the idea, as does not revealing the context of the image. As we’ll see below, sharper images and a fuller context demolish the idea that this is an extraterrestrial life form.

Aliens in Ancient Egypt? A Lotus Flower, Not an Alien

A sharper image of the painting (Figure 2) reveals that we’re not looking at an alien in the wall painting in Ptah Hotep’s tomb.

The “alien” in the painting is actually a stone vase with a spiked plant (the well-known lotus flower) and its buds sticking out the top. The “alien” has no legs or arms. Also, where the close-up appeared to be an alien head with almond eyes, the painting in Figure 3 reveals that there is no skull—there is only a spike-leafed plant. The “mouth” is the rim of the vase.

The lotus was a familiar water plant in ancient Egypt. Here are some examples of the lotus flower in Egyptian art (Figures 4 and 7) and jewelry (Figure 6), along with a contemporary photograph of a lotus plant taken in ancient Egypt (Figure 5): 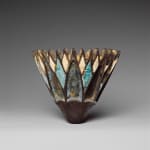 Consider the jewelry inlay in Figure 8. If one colored in the spokes to the left and right of the center green spoke, it would produce “alien eyes.” That is the effect in the painting in the tomb of Ptah Hotep, but in that case, the “black eyes” associated with gray aliens are actually dark-colored buds of the lotus. Examples of the lotus bud with the lotus plant are also not difficult to find in Egyptian art (Figure 9): 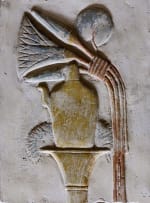 As noted earlier, anyone familiar with Egyptian material culture would know that the “alien” in the tomb painting of Ptah Hotep is a lotus flower in a standing vase. Instead of “one of the most important clues to alien intervention into our ancient history ever made,” we have a tragically comical misidentification.

“The Tomb of Akhet-hotep and Ptah-hotep,” Egyptian Monuments