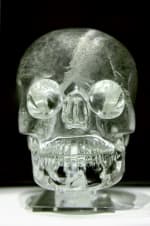 Crystal skulls like the one in Figure 1, found today in the British Museum, have prompted fascination for many years. Made from quartz crystal, paranormal enthusiasts often claim they have special powers or are evidence of ancient alien technology. It’s no surprise, then, that crystal skulls show up in novels, films, and video games.

Part of the thinking behind such claims is another claim—that the skills were created sometime in the Pre-Columbian era (i.e., before the time of Columbus) of Meso-American civilization. Given this assumption, the ability to fashion the skulls doesn’t seem possible with the pre-Columbian tools known to archaeologists of the civilizations of the ancient Maya, Aztecs, and Incas. Consequently, ancient alien theorists have claimed that these civilizations possessed advanced technology given to the people of these regions by extraterrestrial visitors or Atlanteans (Lovett and Hoffman).

The crystal skulls began appearing in Europe as presumed pre-Columbian artifacts during the second half of the 19th century. While archaeologists and scholars doubted almost immediately that they were truly pre-Columbian, researchers and curators did not have the technological tools to evaluate how the skulls were made (Everts). Among the reasons for suspicion are the fact that none of the skulls could be provenance (i.e., there was no record of their actual excavation) and that they were “too perfect” in detail, especially the uniformity of all the teeth (Everts). It is striking that “no quartz skulls have to date been retrieved from well-documented official archaeological excavations” (Sax, et. al, 2753).

In more recent times, the crystal skulls have been subjected to close scrutiny using a variety of technologies, including scanning electron microscopy and geochemical analysis. The verdict is unanimous in regard to every known specimen: they are fakes, created during the 19th century or after. Jane Walsh of the Smithsonian’s National Museum of Natural History explains that, when the skulls were compared to known (provenance) crystal artifacts, the recent manufacture of the skulls became evident. In a series of tests conducted on two allegedly pre-Columbian crystal skulls housed at the British Museum and the Smithsonian, in comparison with known (provenance) crystal artifacts from Meso-America, researchers discerned the following:

[The known] Mixtec rock crystal goblet and a group of Aztec/Mixtec rock crystal beads show no evidence of lapidary wheels. They were probably worked with stone and wood tools charged with abrasives, some of which may have been as hard as corundum. Textual evidence for Mexican lapidary techniques during the early colonial period, supported by limited archaeological evidence, also indicates a technology without the wheel, probably based on natural tool materials. In contrast, the two skulls under consideration were carved with rotary wheels. The British Museum skull was worked with hard abrasives such as corundum or diamond, whereas X-ray diffraction revealed traces of carborundum (SiC), a hard, modern synthetic abrasive, on the Smithsonian skull. Investigation of fluid and solid inclusions in the quartz of the British Museum skull, using microscopy and Raman spectroscopy, shows that the material formed in a mesothermal metamorphic environment equivalent to greenschist facies. This suggests that the quartz was obtained from Brazil or Madagascar, areas far outside pre-Columbian trade networks. (Sax, et.al, 2751 - abstract)

In yet another scientific study comparing a crystal skull and another provenanced crystal artifact, both from the collection of the Musée du quai Branly in Paris, France, the same verdict was again apparent:

Two artefacts made of rock crystal (quartz) from the collection of the Musée du quai Branly in Paris, France, a skull approximately half of the size of a real cranium and a smaller anthropomorphic head, purportedly attributed to pre-Columbian Mesoamerican cultures, were studied to assess their authenticity. The surface of the artefacts was examined by means of optical microscopy and scanning electron microscopy (SEM) and were analyzed nondestructively by ERDA (Elastic Recoil Detection Analysis), an ion-beam analytical method that can measure hydrogen concentration profiles in depth. Optical and SEM imaging of tool marks indicates that the skull has been cut from a rock crystal block using machine lapidary techniques unavailable to pre-Columbian artisans, whereas the anthropomorphic head has more likely been carved and polished with manual techniques comparable to ancient ones. . . . The two methods used in this work converge and support the conclusion that the anthropomorphic head SP is possibly a genuine pre-Columbian artefact, whereas the rock crystal skull SK has to be considered as a forgery manufactured shortly before its introduction in museum collections in 1878. (Calligaro, et. al, 871, 878)

In other words, the skulls were created with the sorts of tools known in the late 19th and early 20th centuries, but not known in Pre-Columbian times. Under electron microscopy, the known, authentic crystal objects to which the skulls were compared show evidence of hand tool marks and slight imperfections (e.g., small gaps between teeth) that are not evident in artifacts made with modern manufacturing equipment.

How do we know that actual pre-Columbian artisans used more primitive hand tools and not modern machinery? Aside from the absence of any such machinery recovered from any Pre-Columbian archaeological site, we have visual and textual evidence from the pre-Columbian peoples:

For comparison, the lapidary [i.e., carving] practices of pre-Columbian Mesoamerica were evaluated in three ways. First, the relatively limited archaeological evidence for workshops, tools, tool materials and raw materials was surveyed. Second, consideration was given to the pictorial and textual evidence of Aztec and Mixtec histories in Codices, in particular, the Florentine Codex documented by the Franciscan Fray Bernardino de Sahagu´ n in the early colonial period. Third, optical and SEM microscopy was used to examine artefacts from well-documented pre-Columbian contexts in Mexico. (Sax, et.al, 2754).

The bottom line is that, when it comes to everything known from Pre-Columbian archaeological sites and codex depictions and descriptions of native ancient carving techniques, the crystal skulls are very obviously modern, not ancient.

If the crystal skulls are not ancient but of modern manufacture, who made them? While the answer to this is ultimately unknowable, scholars have a good idea of who was responsible for the artifacts reaching the market, so to speak.

A number of the crystal skulls can easily be traced to a French artifacts dealer named Eugène Boban. A good deal is known about Boban. Sax writes:

Boban lived in Mexico City from 1850 to 1869 and, during the French intervention (1863–1867), had a shop in the center of town, advertising himself as Emperor Maximilian’s antiquarian (Maillefert, 1867). In 1865, Boban became a member of the French scientific commission, and in this capacity formed a collection of some 2000 pre-Columbian artefacts. Their exhibition in Paris in 1867 was probably the most extensive display of Mexican antiquities to have been held in Europe at that time. Two small crystal skulls were listed in the catalogue.

Boban left Mexico in the hope of selling his Mexican collection and establishing himself as an expert in pre-Columbian artifacts, making Paris his base from 1869 to 1885. . . . Although no crystal skulls were included in a Boban Paris sales catalogue of 1878, one was listed in the subsequent catalogue of 1881. The dimensions correspond to the life-sized carving that was in due course to be purchased by the British Museum.

In 1885, having acquired a considerable reputation as an expert on antiquities, Boban returned to Mexico City and opened a shop, the Museo Cientifico. A collection of human skulls from Mexico and other parts of the world featured among ancient and ethnographic exhibits. The life-size rock crystal carving of a skull, evidently unsold in Paris, was displayed alongside the human examples as a ‘pieza unica en el mundo’ without details of provenance or date. Meanwhile, Boban formed a brief partnership with Leopoldo Batres, the inspector of archaeological monuments appointed by President Porfirio Diaz; the two attempted to sell the skull as an ancient Mexican artifact to the Museo Nacional de Mexico. The carving was not considered to be ancient and was assumed to be modern glass from Europe. Batres then denounced Boban, who hastily moved to New York and attempted to sell his collection by various means. (Sax, et. al, 2757)

Sax later adds that “Recent archival research revealed that the British Museum skull was rejected as a modern artefact by the Museo Nacional de Mexico in 1885, when offered for sale by the collector and dealer, Eugene Boban” (Sax, et. al, 2751). Boban apparently mixed fake pieces with legitimate ones, for some of the items various museums purchased from him are genuine. Nevertheless, the trail making him the source of some of the more famous unprovenanced crystal skulls is quite documentable.