Giants with Double Rows of Teeth?

The internet is a wonderland of unfortunate but interesting ideas. One such idea is that giant human skeletons were found throughout the late 19th and early 20th centuries in North America. Archaeologists, paleontologists, and anthropologists know that such reports are most likely mis-identifications of prehistoric mammals (Howard; White, “Mastodon to Man”). Several specific instances, such as the Williamson County (Tennessee) Giant, are well known to serious researchers (Smith, 2013).

Giants with Double Rows of Teeth? Proof of Nephilim Ancestry?

One such oft-repeated myth is that the biblical giants and other Nephilim from the pre-flood age had double rows of teeth. Researchers like Ross Hamilton “claim that ‘double rows of teeth’ are some kind of genetic trait that can be used to identify populations of extra-large beings or track their movements across the landscape is not supportable based on these cases’” (White, “More Misinterpretations”). Another giant enthusiast writes:

"Another physical characteristic that is evident within this population is the physical abnormality of possessing a double row of teeth.  While a large skeleton would appear to be rare, in combination with a double row of teeth would imply that a single people is being represented" (Zimmerman, Fritz, 2010:33, The Nephilim Chronicles: Fallen Angels in the Ohio Valley; quoted in White, “The Modern Mythology of Giants”)

This notion about ancient giants having double rows of teeth is further argued on the presumed authority of the Babylonian Talmud, an importance text for religious practices and theology in post-biblical Judaism. The Jewish Encyclopedia (1906) describes the biblical giants as having “numerous rows of teeth” along with unusually large feet:

Some of these giants had feet 18 ells in length (Deut. R. i.), and the same length is given for the thigh-bone (Buber, “Tanḥuma,” Debarim, addition 7). Numerous rows of teeth are also ascribed to them (Ḥul. 60a). They were very voracious, eating as many as a thousand oxen, horses, and camels each day (Midrash Abkir).

Further, many authors of books about giants, especially in North America, regularly claim that double rows of teeth are a hallmark description of giants, noting that newspaper accounts of giant skeleton discoveries often used the phrase.

The Bible never makes any of these claims. There isn’t a single biblical passage that describes the Nephilim of any of their related descendants (e.g., Anakim, Rephaim) as having “double rows of teeth.” Ancient Near Eastern sources are equally silent. So where did this Jewish tradition come from? One has to wonder in light of the biblical silence how the idea become part of Jewish tradition and then made the intellectual migration to North America.

The answer is that the idea is fabricated. To be blunt, much of the content of the Talmud and other Jewish books from late antiquity (e.g., the Mishnah) is nothing more than opinion and pure speculation—some of it even contrary to the Bible! The Talmud and Mishnah are basically collections of rabbinic speculations, interpretations, and debates among rabbis. These texts date to well after the biblical period. They are from the time of the end of the Roman period on into the medieval period. This is not the time period associated with the Bible or important texts like the Dead Sea Scrolls.

For example, in a passage that comments about the biblical giant Og (cf. Deut 3:11) the Babylonian Talmud has Og with long fangs that jutted out of his mouth and informs us that Moses himself was 10 cubits (15 feet) tall (Berakhot 9, Folios 54A-64A, 9:1-5, S, X). This has no basis in either the Hebrew Bible or the Jewish literature that immediately followed the biblical period (i.e., the Second Temple Period).

As Colavito has noted, the citation from the Jewish Encyclopedia is actually mistaken as to what the Talmud says about the giants’ teeth:

According to Jewish lore, the first inhabitants of Palestine were giants, specifically the Anakim and the Rephaim. Therefore, extra-biblical sources claimed that the other early inhabitants of Palestine were related to these two giant tribes and must therefore have been giants themselves. Consequently, the Avvim of Deuteronomy 2:23 were assigned a relationship to the Rephaim. According to the Genesis Raba 26:7, the Avvim were one of seven groups of “mighty men of old,” the giants of Genesis 6:4, and the Avvim brought the world to ruin.

All of this background is necessary to understand why anyone would connect Chullin 60b to giants when it is actually talking about the Avvim. (Colavito, “What Does the Talmud Say About Giants’ Teeth?”)

Here is the actual citation from 60b:

For said Rab, “The Avvim came from Yemen.” There is another Tannaite teaching to this effect, “The Avvim came from Yemen. And why were they called Avvim? [Based on these plays on the Hebrew name.] Because they despised [‘wtw] their place.” Another matter: [They were called] Avvim because they lusted [‘yww] for many gods. Another matter: [They were called] Avvim because anyone who saw them was seized by shivering [‘wyt]. And said R. Joseph, “Every one of them had sixteen rows of teeth.” (Neusner translation)

The actual passage has the Avvim giants as having sixteen rows of teeth, not merely two. This is a detail omitted by giant enthusiasts in their alleged histories of giants in North America (and anywhere else).

The Bible does not describe the Avvim as giants. Almost nothing is known about the Avvim. They are mentioned four times in the Hebrew Old Testament, the most important of which is Deut 2:23: “As for the Avvim, who lived in villages as far as Gaza, the Caphtorim, who came from Caphtor, destroyed them and settled in their place.”

One would be misled to conclude that the Philistines were giants. The biblical narrative has the vestiges of the giant Anakim escaping to towns that would later become known for Philistine occupation (Josh 11:22). Goliath (and his brothers) are cast in the Old Testament as the last remaining Anakim / Rephaim dwelling among the Philistines. The Philistines themselves came to the land that would become known as Israel as part of the invasion / migration of what Egyptian texts call the “Sea Peoples” – seafarers from the Aegean. One of the names of these seafaring groups was Peleshet, from which “Philistine” derives (Singer, Hess, Anchor Bible Dictionary). The Old Testament has the Philistines coming from Caphtor (Jer 47:4 and Amos 9:7).

Further, not only is the logic flawed, but the idea depends on misreading Deut 2:23. The verse (cited above) actually has the Avvim being driven out of their villages by the people from Caphtor (the Philistines). They are not the same groups. Hence, you would unfortunately be misled to presume the height of the Philistines and apply it to the Avvim.

Lastly, ancient text does not support that the Philistines are an unusually tall group. No giant skeleton has ever been excavated in Philistine territory. If the Philistines are to be understood as giants, such an absence refutes the idea well. But the absence is no surprise if there were only a handful of individuals of unusual height living in these cities. One wouldn’t expect to find specimens of rare individuals within a population group.

Giants with Double Rows of Teeth? Proof from North America?

As noted above, many authors of books about giants cite newspaper accounts from the late 19th and early 20th centuries with stories that include “double rows of teeth” when describing an alleged discovery of giant human skeletons.

Anthropologist Andy White has shown that these newspaper accounts are not describing skeletons with (literally) more than one set of teeth. The “toothy” description was actually used a good deal by writers of the period to describe a single set of teeth—whether in respect to skeletons or living individuals.

The phrase “double rows of teeth” was meant to describe “the presence of two rows of teeth (an upper and a lower)” (White, “Mythology). White points out that reports of large human skeletons (fact or fictional) that included the “double rows of teeth” expression “were not intending to imply that those skeletons had dental features unlike those of other humans, such as two sets of teeth arranged in concentric rows” (White, “Mythology). To make his case, he provides several humorous examples newspapers from the 19th century (White, “Four Individuals”):

Miss Annie Pauline Scott, reported winner of a $10,000 prize in a beauty contest sponsored by circus magnate Adam Forepaugh, was described in a March 31, 1881, story in the Wyandot Herald:

“Her lips are full and expressive, of a bright vermillion tinge, and when severed by a smile reveal a double row of teeth that are typical in their regularity and dazzling whiteness.”

"One of our great divines has said “God put the tongue under the most secure guard possible—in the center of the skull, guarded by a double row of teeth and then again by a pair of lips.”  Yet it has been known to outwear that same double row of teeth, outwit the lips, and do untold mischief to the possessor and all others.”

Perhaps the example that best illustrates the phrase for American readers would be President Teddy Roosevelt, whose teeth became his trademark. 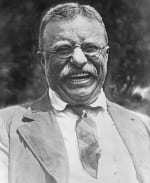 White’s research produced this telling newspaper editorial about Roosevelt—and about what “double rows of teeth” meant in the era that produced so many stories about giant skeleton discoveries (Amador Ledger, December 16, 1904):

All through his marvelous message the chief gentleman of the land, as the “elected president,” magnifies his accidental predecessor. It is the same stale and unprofitable stuff over and over again and again. Always short on common sense and the manners becoming his office, and long on uncommon impudence, chiefly about the “cravens,” “cowards” and “weaklings,” who don’t care a continental nor a colonial curse for him, his “big stick,” his double row of teeth, or ferocious mouth. He cannot care less for them than they do for him, nor have a worse opinion of them.

Consequently, the “double rows of teeth” description for skeletons discovered in various newspaper accounts simply means they had a nice (or full) upper and lower row of teeth—the norm for human beings of all sizes.

Andrew White’s Anthropology Blog, “Four Individuals with a ‘Double Row of Teeth’ to add to your Giant Nephilim File,” 1/10/2015