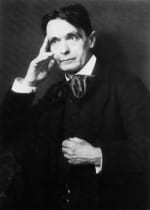 Rudolf Steiner (1861-1925) was born in Kraljevic, Croatia, during the Austrian Hapsburg rule.

Steiner was an esoteric philosopher with an interest in combining science and spiritual experience. Steiner was the founder of the influential philosophy known as Anthroposophy.

Rudolf Steiner’s autobiography describes a number of clairvoyant experiences in his childhood. He kept these to himself, becoming increasingly introverted and lonely. He found within himself a spiritual world, separate from the physical, and yet just as real to him.

Steiner developed an early interest in geometry and was a successful student, graduating from high school in 1879. He then enrolled at the Technical University as a student of geometry and physics. A career in teaching was his ambition at that time. It was here that Steiner was introduced to the writings of Goethe, whose famous play Faust, in particular, fascinated him. Steiner was also an autodidact, reading widely in the areas of philosophy and the sciences.

Alongside the influence of Goethe, much of the foundation for Steiner’s fledgling ideology was supplied by the German idealist Johann Gottlieb Fichte and his "I" (Ich) concept of the ego. Steiner sought to find a way of uniting the “I” (the human spirit and its inner world) with the external world of nature. While traveling by train to Vienna, Steiner met the herbalist Felix Kogutzki (1833-1909), who shared his non-academic and spiritual knowledge of nature. According to Steiner’s autobiography, Kogutzki introduced him to a “Master” (a theosophical term) who initiated him into the wisdom of the ancients. Steiner claimed to have also met with another “Master”, Christian Rosencreutz, and received instruction over the next few years. Steiner also claimed to have been commissioned by his mysterious Master to re-spiritualize the Western world, which had fallen into nihilistic, scientific materialism. Steiner was also charged with teaching a Christo-centric form of karma and reincarnation.

In 1882, Steiner became preoccupied with the development of his philosophy, studying Goethe’s works on the natural sciences. Josef Kürschner invited Steiner to edit Goethe’s works for his “Deutsche National-Literatur,” a project which he would not complete until 1897. Steiner came to interpret Goethe’s approach as a systematic method that could lead one from empirical observation to the direct experience of the Ideal Type. In 1882, Steiner quit his formal studies in order to pursue his project for Kürschner, offering private tutoring to wealthy Viennese families.

Steiner was exposed to the writings of theosophy, alchemists, and Rosicrucians through the poet Friedrich Eckstein. Of particular interest to Steiner was Eckstein’s esoteric interpretation of Goethe’s poetry, which would inspire Steiner’s eventual shift toward a focus on the esoteric.

In 1890, Steiner moved to Weimar to work for the Goethe Archives as an editor. He used his spare time to further develop his philosophy, producing his doctoral dissertation and his opus magnum, Philosophie der Freiheit (Philosophy of Freedom), in 1894. In 1895, Steiner produced a book on Nietzsche. However, this body of work was not enough for him to achieve his goal of becoming a professor.

Steiner was approached by Elisabeth Förster, the sister of Friedrich Nietzsche, in the hopes of persuading him to edit her brother’s works. This may well have influenced Steiner’s favorable appraisal of Nietzsche and his writing about him. According to Steiner’s autobiography, he had the opportunity to meet Nietzsche, who by this stage was bed-ridden due to illness. Steiner claimed to have discerned the location of Nietzsche’s soul, which had become detached from his sickly, immobilized body.

In 1897, Steiner moved to Berlin, taking on the role of Editor-in-Chief for the literary journal Magazine für Literatur. This provided him the opportunity to network with many prominent writers and artists in Berlin. Steiner began famously lecturing within theosophical circles on his esoteric interpretation of Goethe’s work. He described the symbolism of sacrifice and transformation as representative of the development of the human soul in order to reach the higher spiritual realms.

His autobiography describes a profound spiritual experience which occurred just before 1900, where he had a vision he referred to as the Mystery of Golgotha. This inner encounter with Christ revealed to Steiner the truth about His death, burial, and resurrection and the implications for humanity. Steiner gave up his job at Magazine für Literatur and became involved with the Theosophical Society, while maintaining a Christo-centric perspective and developing an esoteric Christianity to transcend traditional theology.

In 1902, Steiner was given the lead role within the German Section of the Theosophical Society. He shared this with his second wife, Marie von Sivers (1867-1948). Steiner had become familiar with the works of Helena Blavatsky during this period and shared her enthusiasm for teaching of the ancient wisdom. In 1908, Steiner founded the journal Luzifer-Gnosis and his own publishing house, Philosophisch-Anthroposophischer Verlag. These became the means through which Steiner’s writings and lectures would be circulated during this prolific period.

His book Theosophie (Theosophy), published in 1904, laid out his study of the nature of human being as body, soul, and spirit. According to Steiner, the physical and spiritual worlds are connected. Steiner also described the immortality of the human spirit which reincarnates into a new body.

His book on “the study of man” was followed up with the two-volume work Wie erlangt man Erkenntnisse der hoeheren Welten? (literally, “Knowledge of the Higher Worlds and Its Attainment,” published in English under the title How to Know Higher Worlds). The book describes humanity’s potential to experience direct knowledge of spiritual worlds. Steiner describes the path to obtaining spiritual knowledge as a three-stage process of developing imagination, inspiration and intuition.

The third work of what are considered to be Steiner’s “basic” books, Die Geheimwissenschaft im Umriss (Occult Science) was published in 1910. It describes the stages of earth and humanity’s evolution. It is within this comprehensive volume that Steiner outlines his interpretation of Christ’s death and resurrection. According to Steiner, “human beings who lift themselves to the Christ Mystery can carry with them into the spiritual world what has been gained here in the world of the senses. And from the spiritual world it flows back again, forasmuch as the human beings, when they reincarnate, bring with them what the Christ Impulse has become for them in the spiritual world between death and new birth.” The Christ Impulse therefore enables humanity to overcome evil (personified as Lucifer and Ahriman) and to evolve to a higher level.

Steiner expounded further on his Christology over the next few years in a series of lectures on the New Testament. He also provided further instruction for students seeking to follow his spiritual path through his Esoterische Schule (Esoteric School), based on the afore-mentioned development of imagination, inspiration, and intuition.

Steiner also used art and drama to express his ideas, producing a number of plays along with his wife Marie von Sivers between 1910 and 1914. This artistic phase culminated in the construction of the Goethaenum (named after Goethe), which was intended to be a representation of the Goetheanist ideal of a synthesis between religion, art, and science. Located in Donach, Switzerland, and finally completed in 1913, the Goethaenum used wood in order to create an organic aesthetic rounded structure.

In 1913, Steiner broke away from the Theosophical Society, having struggled with the leadership (especially Annie Besant) for several years. The Goethaenum became the headquarters for the Anthroposophical Society, taking the term “Anthroposophy” that Steiner had used in lectures to describe his brand of esotericism. Steiner began retroactively expunging any traces of theosophical terminology from new editions of his works and avoided using their idioms in favor of his own. He distanced himself further from the Theosophical Society by championing Christianity (as he understood it) to be a higher, more evolved form of spirituality than the older Indian tradition that many theosophists were keen on promoting.

In 1919, Steiner turned his attention to the political realm, defending Germany and Austria in the face of what he considered to be Anglo-American dominance under Woodrow Wilson. In Die Kernpunkte der sozialen Frage (The Core Issues of the Social Questions) and the booklet Aufruf an das deutsche Volk! (Appeal to the German People), Steiner proposed his own political system.

Steiner then applied his doctrine of human nature to education, providing the pedagogy for a new kind of school: the Waldorfschule. Steiner proposed a holistic approach to education to appeal to the tripartite nature of humanity as he saw it. According to Anthroposophy, the structure of the human being can be divided into three main functions: thought, emotion, and will. These three areas have their own corresponding biological systems within the human body. In order to ensure the child grows in a healthy and harmonious manner, Steiner developed a curriculum which would ideally develop all three aspects of the child.

The Goethaenum was destroyed by arson on New Year’s Eve 1922, which led Steiner to design a new Goethaenum to be constructed from concrete. In 1923, Steiner was given the opportunity to resurrect his Esoteric School (which had dissolved during the latter years of his involvement in the Theosophical Society). He was appointed President of the School of Spiritual Science of the Anthroposophical Society, which would enable him to develop and promote alternative methods of medicines, therapy, and farming. Steiner was unable to complete the School’s curriculum before his death on March 30, 1925. The Second Goethaenum began construction in 1924 and was completed in 1928. It remains the headquarters of the Anthroposophical movement.

Steiner, Rudolf (1904). “Theosophy: An Introduction to the Spiritual Processes in Human Life and in the Cosmos”