Acambaro is a small town in Mexico. Until the 1950s it was virtually unknown outside its own region. That all changed when American newspapers published pictures of some clay figurines recovered by local excavators. They appeared to depict dinosaurs and other monstrous animals. The excavators claimed the figurines (Figure 1) were made by a previously unknown culture thousands of years in the past. Not surprisingly, the Acambaro figures soon became used as evidence that humans and dinosaurs co-existed—how else could the people who made the figures know what dinosaurs looked like?

The Acambaro Figurines: A Short History

Newspaper articles published in the 1950s told the story of Waldemar Julsrud, a German shopkeeper living in Acámbaro. Julsrud claimed he had purchased tens of thousands of figurines from local excavators. By the time of these publications, he was in possession of over 33,000 artifacts.

Professional Mexican archaeologists immediately called the figurines fakes, but that did little to dissuade the thousands of readers intrigued by the possibility of archaeological evidence for dinosaurs that had survived millions of years since their presumed extinction. Defenders of the Acambaro objects argued that the local residents could not have faked them because they had no frame of reference for what a dinosaur looked like. Most of the occupants of the small town were peasants with no education. No fossils had ever been found in the area that might have served as templates for production. Additionally, there were so many figurines that it seemed the whole town would have had to be in on the scam.

The Acambaro Figurines: Investigating the Artifacts

Rejection of the authenticity of the objects was equally passionate. Professional archaeologists set about trying to debunk the figures. According to Alex Pezzati, an archivist at the University of Pennsylvania:

In 1952, Charles DiPeso (or Di Peso), an archaeologist affiliated with the Amerind Foundation in Arizona, visited Acámbaro, studied Julsrud’s collection, and observed two excavators at work. He concluded that the figurines were indeed fakes: Their surfaces displayed no signs of age; no dirt was packed into their crevices; and though some figurines were broken, no pieces were missing and no broken surfaces were worn. Furthermore, the excavation’s stratigraphy clearly showed that the artifacts were placed in a recently dug hole filled with a mixture of the surrounding archaeological layers. DiPeso also learned that a local family had been making and selling these figurines to Julsrud for a peso apiece since 1944, presumably inspired by films shown at Acámbaro’s cinema, locally available comic books and newspapers, and accessible day trips to Mexico City’s Museo Nacional. Even this study, published in American Antiquity, however, failed to convince those who argued that the figurines were genuine.

A few years later, Linton Satterthwaite, Curator of the American Section of the Museo Nacional, exhibited a collection of comic books from 1940s that showed striking visual similarities to Acambaro figures (Figure 2). The goal of the exhibit was to establish a means by which the peasants could create the models (Figure 3). 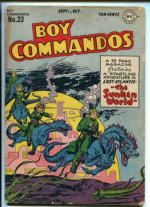 Pezzato notes that between 1969 and 1972 the Museum’s Applied Science Center for Archaeology (MASCA) tried to date some of the figurines using thermoluminescence, or TL dating. Unfortunately, this dating method was in its infancy. Imprecision in the use of the technique would create a controversy. The results of the Acambaro figurine tests produced a date around 2500 BC.

The results were re-evaluated in 1978 by two scientists, Carriveau and Han, when the TL method was more refined. Pezzato summarizes what was discovered:

It became clear that the TL technique employed in MASCA was unable to read the artifacts’ true thermoluminescence. Instead, artificially old dates were seemingly being produced by calculating the figurines’ chemiluminescence, a different phenomenon which cannot be used for dating. As a result, serious doubts were raised about the accuracy of the earlier dates.

Given the flaws of the original tests—flaws that today are well-recognized by TL dating experts—there is no scientific basis for concluding the Acambaro figurines are authentic. Their manufacture can be accounted for, and they bear none of the tell-tale signs (missing pieces, evidence of wear and age) that all artifacts from antiquity show.