The Ta Prohm Temple is today one of the most famous sites and tourist destinations in Cambodia (Figure 1). Nestled in the dense Cambodian jungle, the temple was constructed in 1186 A.D. As Atlas Obscura notes:

“Built at the height of the Khmer Empire by Jayavarman VII as a Buddhist monastery and center of learning, Ta Prohm has a traditional Khmer structure consisting of a series of gradually smaller enclosures. . . . When Angkor was rediscovered in the early 20th century by French archaeologists, all of the temples had become overgrown–but none so spectacularly as Ta Prohm. Nevertheless, as they excavated and restored the other temples, the archaeologists had to make sure that the giant tree roots enveloping Ta Prohm would not further deteriorate the structure or make it dangerous to visit.”

The spectacular temple is famous in its own right, but in recent years it has become particularly known for a carved relief that is part of one of the columns adjacent to its many doors.

In the column (Figure 2), the third carved picture from the bottom has drawn considerable attention. A close-up (Figure 3) reveals why: 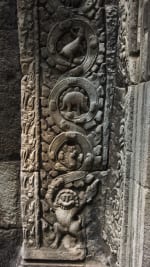 Is this a carving of a dinosaur—a stegosaurus? If it is, it
would be certain proof that dinosaurs and humans co-existed.

The Angkor Wat / Ta Prohm Stegosaurus: Does it Really Look like a Stegosaurus?

The first step toward thinking clearly about the carved relief is to remember what a stegosaurus really looked like. Here is a 19th century drawing of a classic stegosaurus skeleton to refresh our memories (Figure 4):

The stegosaurus has two prominent features: the large triangular plates on its back and the bony spikes at the end of its tale. Less prominent—but perhaps quite important for the Ta Prohm issue—is its small, pointy head.

The Ta Prohm carving does not conform to the stegosaurus anatomy. It lacks the spikes on the end of the tail, and the head of the creature is broad and flat. These anatomical omissions have led most scientists and paleontologists who have looked at the carving to conclude it isn’t a stegosaurus. But what else could it be?

The Angkor Wat / Ta Prohm Stegosaurus: What Could It Be?

There are actually several candidates for what the Ta Prohm carving could be depicting.

First, we do not actually have any sense of scale in the carving. What are considered plates on the back makes us assume the creature is large (like a dinosaur). But what if it is a much smaller creature that has these sorts of anatomical features? Two possible candidates would be the chameleon (Figures 5 and 6) and the pangolin (Figure 7), both of which are native to the region. 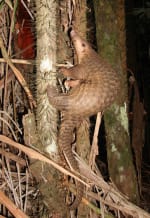 In both instances, there is no need to have spikes on the tails. Both of these creatures would be consistent with the picture. The plates on the back would be exaggerated in the carving. In the case of the chameleons (Figures 5 and 6) the head and neck structure (including horns) has some similarity to the Ta Prohm carving. Interestingly, the pangolin (Figure 7) is a distant relative of the stegosaurus.

Most researchers believe that the best candidate, though, is the Asian rhinoceros (Figure 8). This is due mostly to the fact that this rhino would be no stranger to the location and the structure of its head bears a close resemblance to the Ta Prohm carving (Figure 9).

The only feature that the rhino doesn’t account for is the presumed plates on the back of the Ta Prohm depiction. Some researchers don’t think they are actually plates—part of the animal. Rather, they believe they are background plants, large leaves that are part of the carving. Some other carvings at the temple seem to have this sort of backgrounding, though it is less pronounced. The image (Figure 10) of a swan apparently has the same sort of shapes above its back. Obviously, they would not be part of the swan’s anatomy.

Ultimately, the omission of the spikes on the tail is the strongest reason to reject the stegosaurus identification. While prehistoric animals thought to be extinct have been found alive (e.g., the coelacanth), there is no solid archaeological proof of humans and dinosaurs co-existing. Occam’s Razor seems appropriately useful. Why would we think the carving is a stegosaurus and not some animal native to Cambodia?

Because there are adequate explanations for the Ta Prohm carvings, the omission and lack of supporting data suggest that the carvings are not proof of dinosaur and human co-existence.