The Victory Stele of Naram-Sin

The victory stele of Naram-Sin is an upright stone shaft (6’ 7”) commemorating military exploits associated with the Akkadian king, Naram-Sin. The stele is presently housed in the Louvre in Paris, France. The stele “celebrates the victory of the Akkadian monarch over Satuni, king of the Lullubi (a tribe in the Zagros Mountains), and depicts Naram-Sin ascending a mountain, trampling on the bodies of his enemies, in the image of a god.” (AHE)

Naram-Sin reigned from the city-state of Akkad, the capital of the Akkadian Empire in Mesopotamia, from 2261-2224 BC. He was the grandson of the more famous Sargon the Great (reigned 2334-2279 BC).

Like his grandfather, Naram-Sin became the subject of Mesopotamian legend. He became best known via the Mesopotamian story, The Curse of Agade (written ca. 2047-1750 BC), wherein he offended the gods and became culpable for the decline of the Akkadian Empire. Though the story is considered largely fictional, Naram-Sin was “the first Mesopotamian ruler to have deified himself while he reigned and to have signed official documents with the seal of a god—the god of Akkad—himself.” (AHA) 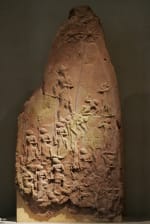 The Victory Stele of Naram-Sin: A Mesopotamian Rocket Ship?

The victory stele of Naram-Sin (Figure 1) has become the subject of misguided speculation. Following internet speculations, television shows like Ancient Aliens have promoted the idea that the “cone-shaped” object in the stele is an ancient rocket ship piloted by the extraterrestrial god, Naram-Sin. Naram-Sin is taller than any of the other individuals on the stele. This is reason enough to associate him with the Nephilim, whom some ancient astronaut theorists say were the Anunnaki, aliens from the planet Nibiru. Lastly, ancient astronaut believers say Naram-Sin is wearing a “space helmet” which proves his extraterrestrial origins.

The Victory Stele of Naram-Sin: Read the Inscriptions

None of these claims by ancient astronaut believers is either factual or credible. The victory stele of Naram-Sin has two cuneiform inscriptions on it that tell us plainly what the stele means. Neither inscription associates Naram-Sin with giants (Nephilim), outer space, or rockets.

The inscription on the left of the stele, just above the head of the king, is fragmentary (Figure 2). It is written in Akkadian and glorifies Naram-Sin’s military victory over the Lullubi people of the Zagros Mountains (in what’s now Iran).

The key here is that the inscription describes the defeat of a mountain people. The “cone” is not a rocket ship—it’s a mountain that is the visual provenance of the victory. 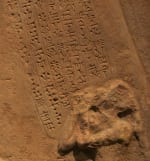 "I am Shutruk-Nahhunte, son of Hallutush-Inshushinak, beloved servant of the god Inshushinak, king of Anshan and Susa, enlarger of my realm, protector of Elam, prince of Elam. At the command of [the god] Inshusinak, I struck down the city of Sippar. I took the stele of Naram-Sin in my hand, and I carried it off and brought it back to Elam. I set it up in dedication to my lord, Inshusinak."

The victory of the Elamite king Shutruk-Nahhunte is known from ancient records. He did not destroy or over-write Naram-Sin's original inscription because he wanted it known he had conquered Sippar and taken the Stele—a city and property associated with the legendary Akkadian king.

Why is Naram-Sin depicted as taller than the other figures? Because this is the primary means ancient artists used to portray kings and other people with royal blood as greater than the masses. Tall figures received the most attention from viewers. Nothing in this stele or any other cuneiform written source says that Naram-Sin was unusually tall. 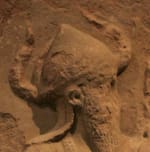 Is Naram-Sin wearing a space helmet? (Figure 4) A closer view shows that this “helmet” does not cover the king’s head or face. It has no “breathing apparatus” or any other feature that would suggest it was needed for space travel. Rather, this is the familiar horned crown, the crown of divinity. Recall that Naram-Sin considered himself a god, as did other kings in the past (e.g., pharaohs, Roman emperors) and even the present (e.g., Japanese emperors to 1945, the Buddha). E. Douglas van Buren, an expert on Mesopotamian art, writes:

In contradistinction to the head-dress of men the gods wore on their heads a horned cap. . . . In the Assyrian period Aššur gradually supplanted Enlil, and it was as an allegorical image of the chief divinity of the State that the horned cap was depicted on royal steles or as an amulet pendent from the necklace worn by a king when he celebrated religious rites. . . . In remote antiquity a pair of bull's horns must have been considered symbolical of divine power and physical force.” (van Buren, 318-319).