Until recently, the dawn of the UFO phenomenon was normally placed in the mid-twentieth century, inaugurated by the Kenneth Arnold sighting of 1947. Television shows like Ancient Aliens try to push alien visitation back into antiquity. One example featured on the show is the alleged presence of flying saucers in medieval and Renaissance Christian art. 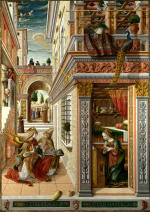 UFOs in Christian Art: Was Jesus an Alien?

There are many examples of medieval and Renaissance Christian paintings that allegedly include flying saucers. One is Cravelli’s famous painting of the Virgin Mary called Annunciation (Figure 1). In the upper left portion a round, luminous object is visible—a UFO according to Ancient Aliens and a number of internet sites. The object is emitting a beam of light onto the Virgin Mary—proof, say UFO believers, that Mary’s conception was aided by extraterrestrials, not God.

UFOs in Christian Art: More than Meets the Eye

What are we to make of Crivelli’s painting? There are, of course, many similar examples.

One art historian, Diego Cuoghi, has stepped up to challenge the idea that the circular object in the painting is a flying saucer. Cuoghi has analyzed dozens of paintings on his website to show that such objects are not UFOs and have nothing to do with aliens.

With respect to Crivelli’s Annunciation, Cuoghi directs viewers to a close-up of the circular object (Figure 2). The enlargement reveals that the “UFO” is actually a cloud. The luminosity within the cloud is an attribute of a group of angels, whose faces can be seen. The painting thus portrays something very logical, given the New Testament’s description of Mary’s conception—it was from heaven. Cuoghi notes that “angel clouds” are a familiar feature of Christian art. 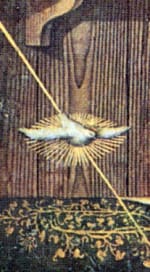 Enlargement of another part of Crivelli’s Annunication reveals another telling detail that dissociates the painting from extraterrestrials. If one follows the beam of light from the angel cloud down to Mary, it passes through a dove before touching the Virgin (Figure 3). The dove is a biblical symbol of the Holy Spirit, and so Crivelli’s painting is quite consistent with the statement in Luke 1:35, where the angel tells Mary, “The Holy Spirit will come upon you, and the power of the Most High will overshadow you; therefore the child to be born will be called holy—the Son of God.”

Cuoghi’s website is, in effect, a lengthy refutation of the range of Christian medieval and Renaissance paintings offered up by Ancient Aliens and amateur internet researchers who seek to interpret biblical content through the pre-conceived filter of alien visitation. It’s a thesis that cannot be sustained when one considers the actual source material.